Threads Through Art: Australian Tapestries is a celebration of Australian art through the tapestry medium. Swiss architect and artist Le Corbusier (Charles-Édouard Jeanneret) famously described tapestries as murals of our time with the advantage being portable. Enthusiasm for the tapestry medium emerged in Australia through exposure from touring exhibitions such as Contemporary French Tapestry (1956), Aubusson Tapestries (1966), 17th & 18th Century French Tapestries (1971) and, most recently, The Lady and the Unicorn (2018). Artists including Margo Lewers, John Coburn, Arthur Boyd, Sidney Nolan and Charles Blackman collaborated with weavers and tapestry workshops in France and Portugal.

This exhibition is developed with Australian Tapestry Workshop and will feature tapestries from public and private collections across Australia.

Earlier today John Olsen has revealed the sculpture Leaping Frog at Catalina, Rose Bay. Be sure to take in this new work when next dining at the fabulous restaurant.

DENFAIR is Australia’s leading destination for contemporary design and art for professional designers, architects, interior stylists and design-lovers. Its curated design event, refined over three years and held annually in Melbourne and Sydney, has become the connection point where today hundreds of local and international brands come together in their passion for design to utilise DENFAIR as a platform for business growth and opportunity.

Olsen’s Contemporary Limited Editions in associations with the curated design event are having several of our artists participate in the event. See all the works below.

OLSEN Gallery would like to congratulate NICHOLAS HARDING , JULIAN MEAGHER and FIONA MCMONAGLE who were all selected as finalists in the 2018 Archibald Prize , as well as JOHN OLSEN who is a finalist in this year’s Wynne Prize.

OLSEN is proud to announce the opening of John Olsen’s The You Beaut Country at the Art Gallery of NSW. This exhibition surveys John Olsen’s remarkable seven-decade career, including paintings, ceramics, tapestries and works on paper from collections across Australia.

It features some of his most iconic and arresting works, including large-scale paintings of Sydney Harbour and Lake Eyre and his career-defining landscape series The You Beaut Country.

Olsen is renowned for his energetic painting style and his lyrical depictions of the Australian landscape and its life-forms. The exhibition traces the development of his spectacular and idiosyncratic vision, highlighting his lifelong interest in the natural world and his continued pursuit to capture the Australian identity.

The You Beaut Country is on view until 12 June 2017. All tickets can be purchased through the AGNSW website here. 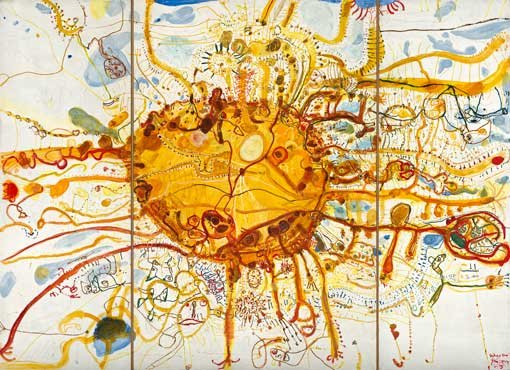 Copies of John Olsen: The You Beaut Country Catalogue – National Gallery of Victoria and John Olsen A Recipe for Art can be purchased through the OLSEN website, here. The luscious colours and delicious shapes in John Olsen’s art make it a feast for the eyes.

On Saturday at Newcastle Art Gallery, people won’t have to just look. They will be able to devour an Olsen painting. Or, at least, a sweet copy of his art.

One of Australia’s greatest living painters, Olsen is returning to the city of his birth for a party at the gallery to celebrate his 89th birthday.

“I’m just so moved and impressed that Newcastle has remembered me this way,” said Olsen, from his Southern Highlands home.

The party will have about 500 guests, including members of the public who applied for free tickets. The venue, which is a stone’s throw from his childhood home, will be decorated with his art, as the gallery’s current exhibition is ‘John Olsen: The City’s Son’. And the icing on the cake will be an Olsen.

Lake Macquarie cake decorator Charmaine Sheehan has spent about 40 hours baking and brushing, mixing and piping, recreating Olsen’s painting, King Sun & the Hunter, which is the exhibition’s centrepiece. The cake artist admitted she had not heard of John Olsen before receiving the commission. On her way to look at the exhibition, she typed his name into the internet.

“I thought, ‘Oh, no!’, but I like a challenge,” Mrs Sheehan said, as she whipped drops of green food colouring into butter cream to recreate his trademark frogs. “It’s an artwork within an artwork.”

The one-metre long cake’s ingredients include about nine kilograms of butter and 38 packets of icing sugar, and how many kilojoules?

“Too many,” laughed Mrs Sheehan, as she brushed on blue and purple edible paints, representing the Hunter River. “But it will be good on the lips for a while.”

Just as the original is good on the eyes. Olsen painted King Sun & the Hunter as a tribute to his home region. The gallery, along with its society and foundation, is fund-raising to buy the painting, so it can remain in the city’s collection. Gallery manager Lauretta Morton wouldn’t disclose what the target amount was but said “we’re well over half-way” and she was “extremely confident” it would be reached.

The Olsen exhibition has attracted more than 21,000 visitors and generated a lot of excitement.

“I’ve been here 15 years, and I’ve never seen a community connection as strong as this,” said Lauretta Morton.

John Olsen, who couldn’t attend the opening in November due to illness, said it was “very humbling” that there had been such a warm response to the exhibition.

“Never in my life could I have imagined such a thing, it’s moved me very much,” the artist said. “I’m going to make it a habit to visit Newcastle at least two or three times a year.”

Michael Brand (AGNSW Director), Matt Moran (Chef) and John Olsen at the launch of ‘John Olsen: a recipe for art’ at the Art Gallery of NSW.

As a young man John Olsen made a life-changing discovery – Mediterranean cuisine, ‘the cuisine of the sun’. Fresh, seasonal produce and its preparation has been central to his life and a key ingredient in his creativity and his art, from his famous paella paintings to lively sketches in his journals. -AGNSW

To purchase John Olsen: A Recipe for Art please follow the link here

Now open at the Newcastle Art Gallery, John Olsen’s ‘The City’s Son’, a retrospective of John’s work that is a wonderful celebration of his affection for his birth place with carefully selected works capturing the Hunter regions waterways together with beaches, lakes, and wetlands.

The show also features the new acquisition by John entitled ‘King  Sun and the Hunter’.

Born in Newcastle in 1928, Olsen considers himself a Novocastrian and in November he returns home to curate an exhibition that captures the essence of his birthplace.

JOHN OLSEN: The City’s Son, features works personally chosen by the artist that reflect his affection for Newcastle and the Hunter region’s waterways; the beaches, harbour, lake, river and wetlands. Describing the works of art selected as ‘going coastal’ they resonate with the city’s relaxed culture and lifestyle heart. Importantly, the exhibition will showcase 35 works of art from the Gallery’s collection including ceramics, prints and paintings spanning 1954 -1992.