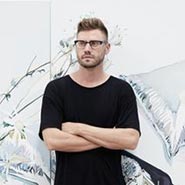 Julian Meagher is a 41 year old Sydney based artist who has exhibited extensively across Australia, Asia and America; including the Melbourne International Art Fair 2010, 2012 and 2014, Shanghai Contemporary Art Fair 2010, Scope Miami 2011, 2012 and Sydney Contemporary Art Fair 2013, 2015 and 2017. He is represented by Olsen Gallery, Sydney; Edwina Corlette Gallery, Brisbane and Yavuz Gallery, Singapore. He was a co-director of Chalk Horse Gallery from 2009-2016.

Meagher has been a finalist in the Archibald Portrait Prize 2014, 2015 and 2018, the Wynne Prize 2015 and the Gold Award at Rockhampton Regional Gallery 2016. Meagher has also been a finalist multiple times in the Doug Moran Portrait prize, Salon Des Refuses, Metro Art prize, Blake Prize for Religious Art and the RBS Emerging Artist Prize. In 2009 and 2012 Meagher was a recipient of the New Work Grant from the Australia Council of the Arts.